The headers are showing up here in Cyrillic (at least something similar, perhaps Serbian), so I have a hard time finding the "log in" button.

Today I started off at the American High School, actually now a K-12. It's something like the Ecole Bilangue -- the students are local, the classes are mainly in English, the teachers are American and Canadian. (They couldn't get enough American teachers, so they expanded to Canada.) I went into a classroom and chatted with the students about libraries and the Internet. When one student said that she couldn't image reading a book on a screen I pulled out my PDA with a book on it and passed it around. Then we moved on to audio books and I happened to have "On the Road" on my PDA, so the students played with that for a bit. I visited their library and chatted with the head of the school (a retired Canadian, I believe) about how to get them more resources. The students don't have the concept of borrowing books, but he's willing to work through the issue of helping them learn about that, knowing that some books will be lost in the process.

The big issue for this school and for a lot of libraries is how, as a small institution, to afford subscriptions to online resources. For books you can get donations, but there isn't a kind of charity that will get you online access. Nor can you get online access in small quantities. There aren't the institutional structures here that would make it possible to form licensing consortia. 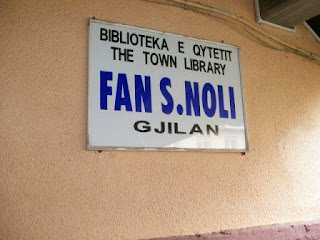 In Gjilan, it turns out that we were there to celebrate the signing of a contract extension that will allow the public library to use Aleph. There were many speeches and musical interludes, plus two sessions of epic poems read to musical accompanyment. We then went into a room of the library to look at a selection of books that had been donated to the library through KFOR -- a sadly motley collection of well-meaning; everything from out of date reference books to a copy of "The Internet for Dummies." Interestingly there were a number of books on women's health. 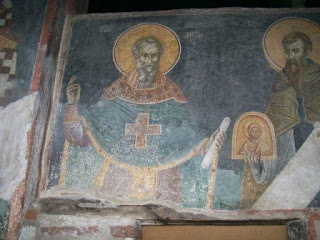 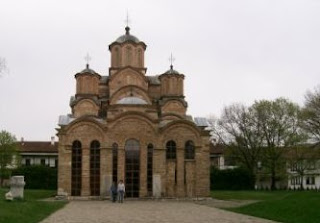 After Gjilan we stopped in Gracinica (the first c should have a diacritic). There we visited a 14th century orthodox Christian church that is run by some rather aged nuns who also keep a large garden and a thriving apiary. The church is stunning, entirely covered on the inside with frescos. We had to find a nun to open up the church (after passing by the permanent Danish KFOR guards at the gate). This is a Serbian area of Kosovo, but the translator with us from the Embassy spoke Serbian as well as Albanian. We visited the church, then Laura, who has taken me through all of this week as the Embassy member charged with Library Week, wanted to buy some of the nuns' honey, and I wanted some of their beeswax candles. We had to negotiate a bit because this area still functions in Serbian dinars rather than the Euros that the rest of Kosovo uses. (This is all of 3 miles from Prishtina.)

Tonight I am meeting an American friend of a friend for dinner, then I pack (the suitcase that only just got here) and get ready for tomorrow. I give a talk in the morning, then have meetings until it is time to go to the airport. Around 4 pm I board a plane for Vienna. I spend the night there, then on Saturday a.m. I'm off to Franfurt to connect to a flight for San Francisco. I hope the travel fairies are with me on the trip -- I could use a smooth flight home, even though this trip has been a relatively easy one.
Posted by Karen Coyle at 7:48 AM