Of the many advantages to retirement is the particular one of idle time. And I will say that as a librarian one could do no better than to spend some of that time communing with the history of the profession. The difficulty is that it is so rich, so familiar in many ways that it is hard to move through it quickly. Here is just a fraction of the potential value to be found in the September issue of volume two of Library Journal.* Admittedly this is a particularly interesting number because it reports on the second meeting of the American Library Association.

For any student of library history it is especially interesting to encounter certain names as living, working members of the profession.

Other names reflect works that continued on, some until today, such as Poole and Bowker, both names associated with long-running periodical indexes.

What is particularly striking, though, is how many of the topics of today were already being discussed then, although obviously in a different context. The association was formed, at least in part, to help librarianship achieve the status of a profession. Discussed were the educating of the public on the role of libraries and librarians as well as providing education so that there could be a group of professionals to take the jobs that needed that professional knowledge. There was work to be done to convince state legislatures to support state and local libraries.

One of the first acts of the American Library Association when it was founded in 1876 (as reported in the first issue of Library Journal) was to create a Committee on Cooperation. This is the seed for today's cooperative cataloging efforts as well as other forms of sharing among libraries. In 1877, undoubtedly encouraged by the participation of some members of the publishing community in ALA, there was hope that libraries and publishers would work together to create catalog entries for in-print works. 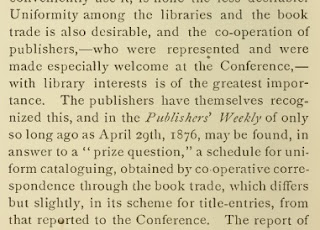 This is one hope of the early participants that we are still working on, especially the desire that such catalog copy would be "uniform." Note that there were also discussions about having librarians contribute to the periodical indexes of R. R. Bowker and Poole, so the cooperation would flow in both directions.

The physical organization of libraries also was of interest, and a detailed plan for a round (actually octagonal) library design was presented:

His conclusion, however, shows a difference in our concepts of user privacy.

Especially interesting to me are the discussions of library technology. I was unaware of some of the emerging technologies for reproduction such as the papyrograph and the electric pen. In 1877, the big question, though, was whether to employ the new (but as yet un-perfected) technology of the typewriter in library practice. 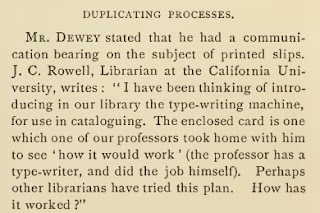 There was some poo-pooing of this new technology, but some members felt it may be reaching a state of usefulness. 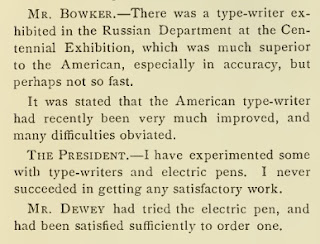 "The President" in this case is Justin Winsor, Superintendent of the Boston Library, then president of the American Library Association. Substituting more modern technologies, I suspect we have all taken part in this discussion during our careers.

Reading through the Journal evokes a strong sense of "le plus ça change..." but I admit that I find it all rather reassuring. The historical beginnings give me a sense of why we are who we are today, and what factors are behind some of our embedded thinking on topics.

* Many of the early volumes are available from HathiTrust, if you have access. Although the texts themselves are public domain, these are Google-digitized books and are not available without a login. (Don't get me started!) If you do not have access to those, most of the volumes are available through the Internet Archive. Select "text" and search on "library journal". As someone without HathiTrust institutional access I have found most numbers in the range 1-39, but am missing (hint, hint): 5/1880; 8-9/1887-88; 17/1892; 19/1894; 28-30/1903-1905; 34-37;1909-1912. If I can complete the run I think it would be good to create a compressed archive of the whole and make that available via the Internet Archive to save others the time of acquiring them one at a time. If I can find the remainder that are pre-1923 I will add those in.