One of the issues that plagues FRBR is the rigidity of the definitions of work, expression, and manifestation, and the "one size fits all" nature of these categories. We've seen comments (see from p. 22) from folks in the non-book community that the definitions of these entities is overly "bookish" and that some non-book materials may need a different definition of some of them. One solution to this problem would be to move from the entity-relation model, which does tend to be strict and inflexible, to an object-oriented model. In an object-oriented (OO) model one creates general types with more specific subtypes that allows the model both to extend as needed and to accommodate specifics that apply to only some members of the overall type or class. Subtypes inherit the characteristics of the super-type, whereas there is no possibility of inheritance in the E-R model. By allowing inheritance, you avoid both redundancy in your data but also the rigidity of E-R and the relational model that it supports.

This may sound radical, but the fact is the FRBR does define some subtypes. They don't appear in the three high-level diagrams, so it isn't surprising that many people aren't aware of them. They are present, however in the attributes. Here is the list of attributes for FRBR work:

I've placed in italics those that are subtypes of work. There are two: musical work, and cartographic work. I would also suggest that "intended termination" could be considered a subtype of "continuing resource", but this is subtle and possibly debatable.

Other subtypes in FRBR are:

These are the subtypes that are present in FRBR today, but because sub-typing probably was not fully explored, there are likely to be others.

Object-oriented design was a response to the need to be able to extend a data model without breaking what is there. Adding a subtype should not interfere with the top-level type nor with other subtypes. It's a tricky act of design, but when executed well it allows you satisfy the special needs that arise in the community while maintaining compatibility of the data.

Since we seem to respond well to pictures, let me provide this idea in pictures, keeping in mind that these are simple examples just to get the idea across. 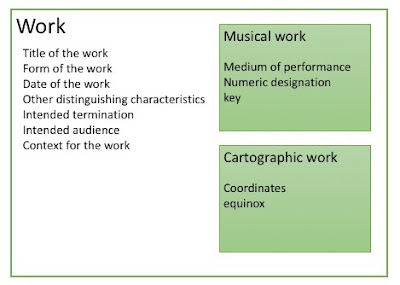 The above picture models what is in FRBR today, although using the inheritance capability of OO rather than the E-R model where inheritance is not possible. Both musical work and cartographic work have all of the attributes of work, plus their own special attributes.

If it becomes necessary to add other attributes that are specific to a single type, then another sub-type is added. This new subtype does not interfere with any code that is making use of the elements of the super-type "work". It also does not alter what the music and maps librarians must be concerned with, since they are in their own "boxes." As an example, the audio-visual community did an analysis of BIBFRAME and concluded, among other things, that the placement of duration, sound content and color content in the BIBFRAME Instance entity would not serve their needs; instead, they need those elements at the work level.* 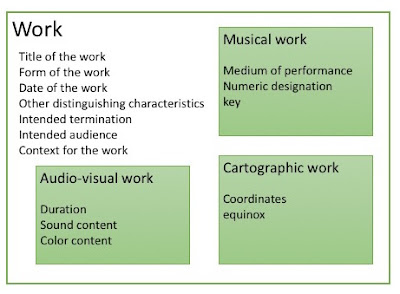 This just shows work, and I don't know how/if it could or should be applied to the entire WEMI thread. It's possible that an analysis of this nature would lead to a different view of the bibliographic entities. However, using types and sub-types, or classes and sub-classes (which would be the common solution in RDF) would be far superior to the E-R model of FRBR. If you've read my writings on FRBR you may know that I consider FRBR to be locked into an out-of-date technology, one that was already on the wane by 1990. Object-oriented modeling, which has long replaced E-R modeling, is now being eclipsed by RDF, but there would be no harm in making the step to OO, at least in our thinking, so that we can break out of what I think is a model so rigid that it is doomed to fail.

*This is an over-simplification of what the A-V community suggested, modified for my purposes here. However, what they do suggest would be served by a more flexible inheritance model than the model currently used in BIBFRAME.

As promised, my book, FRBR: Before and After, is now available in PDF as open access with a CC-BY license. I'd like to set up some way that we can turn this into a discussion, so if you have a favorite hanging out place, make a suggestion.

Also, the talk I gave at SWIB2015 is now viewable on youtube: Mistakes Have Been Made. That is a much shorter (30 minutes) and less subdued explanation of what I see as the problems with FRBR. If that grabs you, some chapters of the book will give you more detail, and the bibliography should keep anyone busy for a good long time.

Let me be clear that I am not criticizing FRBR as a conceptual model of the bibliographic universe. If this view helps catalogers clarify their approach to cataloging problems, then I'm all for it. If it helps delineate areas that the cataloging rules must cover, then I'm all for it. What I object to is that implication that this mental model = a data format. Oddly, both the original FRBR document  and the recent IFLA model bringing all of the FR's together, are very ambiguous on this. I've been told, in no uncertain terms, by one of the authors of the latter document that it is not data model, it's a conceptual model. Yet the document itself says:


The intention is to produce a model definition document that presents the model concisely and clearly, principally with formatted tables and diagrams, so that the definitions can be readily transferred to the IFLA FRBR namespace for use with linked open data applications.

And we have the statement by Barbara Tillett (one of the developers of FRBR) that FRBR is a conceptual model only:


"FRBR is not a data model. FRBR is not a metadata scheme. FRBR is not a system design structure. It is a conceptual model of the bibliographic universe." Barbara Tillett. FRBR and Cataloging for theFuture. 2005

This feels like a variation on the old Saturday Night Live routine: "It's a floor wax. No! It's a dessert topping!" The joke being that it cannot be both. And that's how I feel about FRBR -- it's either a conceptual model, or a data model. And if it's a data model, it's an entity-relation model suitable for, say, relational databases. Or, as David C. Hay says in his 2006 book "Data Model Patterns: A Metadata Map":


Suppose you are one of those old-fashioned people who still models with entity classes and relationships.

It's not that entities and relations are useless, it's just that this particular style of data modeling, and the technology that it feeds into, has been superseded at least twice since the FRBR task group was formed: by object-oriented design, and by semantic web design. If FRBR is a conceptual model, this doesn't matter. If it's a data model -- if it is intended to be made actionable in some 21st century technology -- then a whole new analysis is going to be needed. Step one, though, is getting clear which it is: floor wax, or dessert topping.

Many of you will have heard the name "Elkins Park" for the first time this week as the jurisdiction of Bill Cosby indictment. It is undoubtedly the most famous thing that Elkins Park has been known for. However, it has a connection to books and libraries that those of us involved with books and libraries should celebrate as a counter to this newly acquired notoriety.

The Elkins family was one of the 19th century's big names in Pennsylvania. William Lukens Elkins was one of the first "oil barons" whose company was the first to produce gasoline, just in time for the industrial and transportation revolution that would use untold gallons of the stuff. His business partner was Peter Widener, and the two families were intertwined through generations, their Philadelphia mansions built across the street from each other.

Eleanor Elkins, daughter of WL Elkins, married George Widener, son of Peter Widener, essentially marrying the two families. Eleanor and George had a son, Harry. Unfortunately, they were rich enough to book passage on the maiden voyage of the Titanic in 1912. George and Harry perished; Eleanor Elkins Widener survived.

Harry Widener had been an avid book collector, sharing this interest with his best friend, William McIntire Elkins. Harry had graduated from Harvard, as had his friend WM Elkins, and his will instructed his mother to donate his collection to Harvard, "to be known as the Harry Elkins Widener Collection." His mother took it one further and funded the creation of a new library that would house both her son's collection but also the entire Harvard library collection. Yes, I am talking about the now famous Widener Library.

His friend, William McIntire Elkins, lived until 1947, and during his lifetime amassed a huge rare book collection. He was particularly interested in Dickensiana, which included not only first serially published editions of Dickens' works, but also Dickens' desk, candlesticks, ink well, etc. His will left his entire collection to the Free Library of Philadelphia. Well, it turned out that it was not only his book collection, but the entire room, which was moved into the library, looking much as it did during Elkins' life.

Elkins Park is named, of course, for the Elkins family whose massive estate held an impressive array of mansions and grounds. Much of the estate has been divided up and sold off, but portions remain.
So that's the story of Elkins Park and how it fits into libraries and the rarified world of rare books. But I have another small bit to add to the story. In 1947, at the time of his death, John and Eleanor King, my grandparents, were working for (as he was known in my family) "old man Elkins" -- that is William McIntire Elkins. My grandfather was gardener and chauffeur for Elkins, and my grandmother was (as she called it) the executive of the household. When the library was transferred to the Free Library of Philadelphia, photographs were taken out the windows so that the "view" could be reproduced. Those photographs show the grounds that my grandfather cared for, and the room itself was undoubtedly very familiar to my grandmother (although she would never admit to having done any dusting with her own hand). A small amount bequeathed to them in Elkins' will allowed them to own their own property for the first time, just a few acres, but enough to live on, with sheep and chickens and a single steer. I have early memories of that farm, and a few family photos. Little did any of us know at the time that I would reconnect all of this because of books.
Posted by Karen Coyle at 9:11 AM 1 comment: