One of the disadvantages of a long tradition is that the reasons behind certain practices can be lost over time. This is definitely the case with many practices in libraries, and in particular in practices affecting the library catalog. In U.S. libraries we tend to date our cataloging practices back to Panizzi, in the 1830's, but I suspect that he was already building on practices that preceded him.

A particular problem with this loss of history is that without the information about why a certain practice was chosen it becomes difficult to know if or when you can change the practice. This is compounded in libraries by the existence of entries in our catalogs that were created long before us and by colleagues whom we can no longer consult. 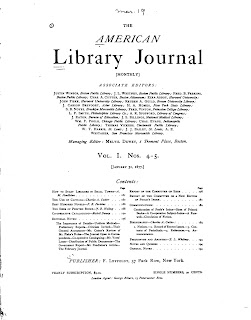 I was recently reading through volume one of the American Library Journal from the year 1876-1877. The American Library Association had been founded in 1876 and had its first meeting in Philadelphia in September, 1876. U.S. librarianship finally had a focal point for professional development. From the initial conference there were a number of ALA committees working on problems of interest to the library community. A Committee on Cooperative Cataloguing, led by Melvil Dewey, (who had not yet been able to remove the "u" from "cataloguing") was proposing that cataloging of books be done once, centrally, and shared, at a modest cost, with other libraries that purchased the same book. This was realized in 1902 when the Library of Congress began selling printed card sets. We still have cooperative cataloging, 140 years later, and it has had a profound effect on the ability of American libraries to reduce the cost of catalog creation.

Other practices were set in motion in 1876-1877, and two of these can be found in that inaugural volume. They are also practices whose rationales have not been obvious to me, so I was very glad to solve these mysteries.

Some time ago I asked on Autocat, out of curiosity, why libraries use sentence case for titles. No one who replied had more than a speculative answer. In 1877, however, Charles Ammi Cutter reports on The Use of Capitals in library cataloging and defines a set of rules that can be followed. His main impetus is "readability;" that "a profusion of capitals confuses rather than assists the eye...." (He also mentions that this is not a problem with the Bodleian library catalog, as that is written in Latin.)

Cutter would have preferred that capitals be confined to proper names, eschewing their use for titles of honor (Rev., Mrs., Earl) and initialisms (A.D). However, he said that these uses were so common that he didn't expect to see them changed, and so he conceded them.

All in all, I think you will find his rules quite compelling. I haven't looked at how they compare to any such rules in RDA. So much still to do!

I have often pointed out, although it would be obvious to anyone who has the time to question the practice, that books are measured in centimeters in Anglo-American catalogs, although there are few cultures as insistent on measuring in inches and feet than those. It is particularly un-helpful that books in libraries are cataloged with a height measurement in centimeters while the shelves that they are destined for are measured in inches. It is true that the measurement forms part of the description of the book, but at least one use of that is to determine on which shelves those books can be placed. (Note that in some storage facilities, book shelves are more variable in height than in general library collections and the size determination allows for more compact storage.) If I were to shout out to you "37 centimeters" you would probably be hard-pressed to reply quickly with the same measurement in inches. So why do we use centimeters?

The newly-formed American Library Association had a Committee on Sizes. This committee had been given the task of developing a set of standard size designations for books. The "size question" had to do with the then current practice to list sizes as folio, quarto, etc. Apparently the rise of modern paper making and printing meant that those were no longer the actual sizes of books. In the article by Charles Evans (pp. 56-61) he argued that actual measurements of the books, in inches, should replace the previous list of standard sizes. However, later, the use of inches was questioned. At the ALA meeting, W.F. Poole (of Poole's indexes) made the following statement (p. 109):


"The expression of measure in inches, and vulgar fractions of an inch, has many disadvantages, while the metric decimal system is simple, and doubtless will soon come into general use."

The committee agreed with this approach, and concluded:


"The committee have also reconsidered the expediency of adopting the centimeter as a unit, in accordance with the vote at Philadelphia, querying whether it were really best to substitute this for the familiar inch. They find on investigation that even the opponents of the metric system acknowledge that it is soon to come into general use in this country; that it is already adopted by nearly every other country of importance except England; that it is in itself a unit better adapted to our wants than the inch, which is too large for the measurement of books." (p. 180)


The members of the committee were James L. Whitney, Charles A. Cutter, and Melvil Dewey, the latter having formed the American Metric Bureau in July of 1876, both a kind of lobbying organization and a sales point for metric measures. My guess is that the "investigation" was a chat amongst themselves, and that Dewey was unmovable when it came to using metric measures, although he appears not to have been alone in that. I do love the fact that the inch is "too large," and that its fractions (1/16, etc.) are "vulgar."

Dewey and cohort obviously weren't around when compact discs came on the scene, because those are measured in inches ("1 sound disc : digital ; 4 3/4 in"). However, maps get the metric treatment: "1 map : col. ; 67 x 53 cm folded to 23 x 10 cm". Somewhere there is a record of these decisions, and I hope to come across them.

It would have been ideal if the U.S. had gone metric when Dewey encouraged that move. I suspect that our residual umbilical chord linking us to England is what scuppered that. Yet it is a wonder that we still use those too large, vulgar measurements. Dewey would be very disappointed to learn this.


So there it is, two of the great mysteries solved in the record of the very first year of the American library profession. Here are the readings; I created separate PDFs for the two most relevant sections:

Also note that beginning on page 92 there is a near verbatim account of every meeting at the first American Library Association conference in Philadelphia, September, 1876. So verbatim that it includes the mention of who went out for a smoke and missed a key vote. And the advertisements! Give it a look.
Posted by Karen Coyle at 9:56 AM 3 comments: