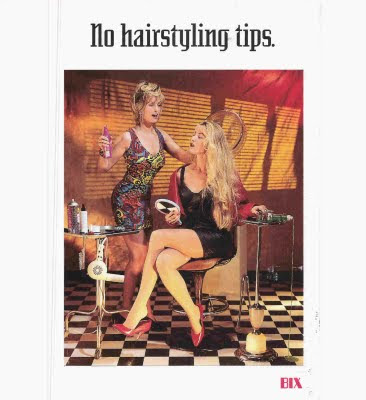 In 1996 I wrote a piece that was published in a book called Wired Women about the gender gap in computer advertising. (Online version) At the time, the computer world was so awash in testosterone that the back pages of computer user magazines, like PC Magazine, were mainly adds for pornography. The message for women was clear: No Girls Allowed. Like this postcard ad for a mid-1990's bulletin board system, which said on the back:

No wasted time.
No garbage.
No noise.
No irrelevant clutter.
For serious computer programmers and developers, BIX is the exclusive online club.

And one could add: no girls allowed.

I thought all of that was in the past, but ... nooooooooo. This Verizon Droid ad is just an updated version of that 1996 BBS advertisement.


Not only should the phone not be pretty (so maybe Ugly Betty would be acceptable), but it is not a "tiara-wearing digitally clueless beauty pageant queen" and, as the women puts on her lipstick in the street, "it's not a princess, it's a robot." I don't want to go so far as to assume that the attack on the fashion-plate male manikins equals homophobia, but the ending salvo of "It trades hair-do for can-do" is eerily reminiscent of the image above.
Posted by Karen Coyle at 11:35 AM 2 comments: