FRBR Before and After - Afterword

Below is a preview of the Afterword of my book, FRBR, Before and After. I had typed the title of the section as "Afterward" (caught by the copy editor, of course), and yet as I think about it, that wasn't really an inappropriate misspelling, because what really matters now is what comes after - after we think hard about what our goals are and how we could achieve them. In any case, here's a preview of that "afterward" from the book.

There is no question that FRBR represents a great leap forward in the theory of bibliographic description. It addresses the “work question” that so troubled some of the great minds of library cataloging in the twentieth century. It provides a view of the “bibliographic family” through its recognition of the importance of the relationships that exist between created cultural objects. It has already resulted in vocabularies that make it possible to discuss the complex nature of the resources that libraries and archives gather and manage.

As a conceptual model, FRBR has informed a new era of library cataloging rules. It has been integrated into the cataloging workflow to a certain extent. FRBR has also inspired some non-library efforts, and those have given us interesting insight into the potential of the conceptual model to support a variety of different needs.

The FRBR model, with its emphasis on bibliographic relationships, has the potential to restore context that was once managed through alphabetical collocation to the catalog. In fact, the use of a Semantic Web technology with a model of entities and relations could be a substantial improvement in this area, because the context that brings bibliographic units together can be made explicit: “translation of,” “film adaptation of,” “commentary on.” This, of course, could be achieved with or without FRBR, but because the conceptual model articulates the relationships, and the relationships are included in the recent cataloging rules, it makes sense to begin with FRBR and evolve from there.

However, the gap between the goals developed at the Stockholm meeting in 1991 and the result of the FRBR Study Group’s analysis is striking. FRBR defined only a small set of functional requirements, at a very broad level: find, identify, select, and obtain. The study would have been more convincing as a functional analysis if those four tasks had been further analyzed and had been the focus of the primary content of the study report. Instead, from my reading of the FRBR Final Report, it appears that the entity-relation analysis of bibliographic data took precedence over user tasks in the work of the FRBR Study Group.

The report’s emphasis on the entity-relation model, and the inclusion of three simple diagrams in the report, is mostly likely the reason for the widespread belief that the FRBR Final Report defines a technology standard for bibliographic data. Although technology solutions can and have been developed around the FRBR conceptual model, no technology solution is presented in the FRBR Final Report. Even more importantly, there is nothing in the FRBR Final Report to suggest that there is one, and only one, technology possible based on the FRBR concepts. This is borne out by the examples we have of FRBR-based data models, each of which interprets the FRBR concepts to serve their particular set of needs. The strength of FRBR as a conceptual model is that it can support a variety of interpretations. FRBR can be a useful model for future developments, but it is a starting point, not a finalized product.

There is, of course, a need for technology standards that can be used to convey information about bibliographic resources. I say “standards” in the plural, because it is undeniable that the characteristics of libraries and their users have such a wide range of functions and needs that no one solution could possibly serve all. Well-designed standards create a minimum level of compliance that allows interoperability while permitting necessary variation to take place. A good example of this is the light bulb: with a defined standard base for the light bulb we have been able to move from incandescent to fluorescent and now to LED bulbs, all the time keeping our same lighting fixtures.
We must do the same for bibliographic data so that we can address the need for variation in the different approaches between books and non-books, and between the requirements of the library catalog versus the use of bibliographic data in a commercial model or in a publication workflow.

Standardization on a single over-arching bibliographic model is not a reasonable solution. Instead, we should ask: what are the minimum necessary points of compliance that will make interoperability possible between these various uses and users? Interoperability needs to take place around the information and meaning carried in the bibliographic description, not in the structure that carries the data. What must be allowed to vary in our case is the technology that carries that message, because it is the rapid rate of technology change that we must be able to adjust to in the least disruptive way possible. The value of a strong conceptual model is that it is not dependent on any single technology.

It is now nearly twenty years since the Final Report of the FRBR Study Group was published. The FRBR concept has been expanded to include related standards for subjects and for persons, corporate bodies, and families. There is an ongoing Working Group for Functional Requirements for Bibliographic Records that is part of the Cataloguing Section of the International Federation of Library Associations. It is taken for granted by many that future library systems will carry data organized around the FRBR groups of entities. I hope that the analysis that I have provided here encourages critical thinking about some of our assumptions, and fosters the kind of dialog that is needed for us to move fruitfully from broad concepts to an integrative approach for bibliographic data.

From FRBR, Before and After, by Karen Coyle. Published by ALA Editions, 2015

FRBR, Before and After by Karen Coyle is licensed under a Creative Commons Attribution 4.0 International License. 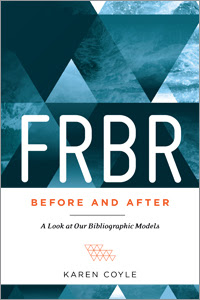 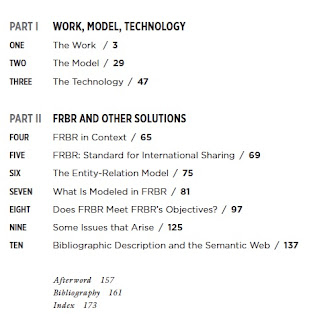 
The text will also be available as open access in early 2016. This is thanks to the generosity of ALA Editions, who agreed to this model. I do hope that enough libraries and individuals do decide to purchase the hard copy that ALA Publishing puts out so that this model of print plus OA is economically viable. I can attest to the fact that the editorial work and application of design to the book has produced a final version that I could not have even approximated on my own
Posted by Karen Coyle at 10:15 PM No comments: