By way of explanation

“Readers who are familiar with conventional logical semantics may find it useful to think of RDF as a version of existential binary relational logic in which relations are first-class entities in the universe of quantification. Such a logic can be obtained by encoding the relational atom R(a,b) into a conventional logical syntax, using a notional three-place relation Triple(a,R,b); the basic semantics described here can be reconstructed from this intuition by defining the extension of y as the set { : Triple(x,y,z)} and noting that this would be precisely the denotation of R in the conventional Tarskian model theory of the original form R(a,b) of the relational atom. This construction can also be traced in the semantics of the Lbase axiomatic description.”
From the RDF Semantics document


"Doubts about the ability to know the order of the world catalyzed a crucial change, away from taxonomic forms of information storage based on natural language and toward new ones based on a symbolic language of analytical abstraction. Mathematics promised a new vision of order for both the natural and the moral worlds, where confusion was resolved by jettisoning whatever could not be known with certainty."
Hobart, Michael E. Information Ages: Literacy, Numeracy, and the Computer Revolution. Baltimore: Johns Hopkins University Press, 1998. p. 90

“We could try to feed it algorithms for everything. There are only slightly more of them than there are particles in the universe. It would be like building a heart muscle molecule by molecule. And we’d still have a hell of an indexing and retrieval problem at the end. Even then, talking to such a decision tree would be like talking to a shopping list. It’d never get any smarter than a low-ranking government bureaucrat.”
Richard Powers, Galatea 2.2, 1st Perenniel Ed., 1996. p. 78

Posted by Karen Coyle at 2:23 PM No comments:

Beginning with the first edition of the Dewey Decimal System and Relativ Index, Melvil Dewey includes this intriguing acknowledgment:


Perhaps the most fruitful source of ideas was the Nuovo sistema di Catalogo Bibliografico Generale of Natale Battezzati, of Milan. Certainly he [Dewey] is indebted to this system adopted by the Italian publishers in 1871, though he has copied nothing from it.

It so happens that I did some research on this in the national library in Milan in the mid-1970's and never published what I learned. This blog post makes use of notes and photocopies from that time.

There are a number of puzzling things about Dewey's mention of Battezzati's system. One is that it had little or nothing to do with classification. It was, however, an ingenious card system. The story, in brief, goes like this: 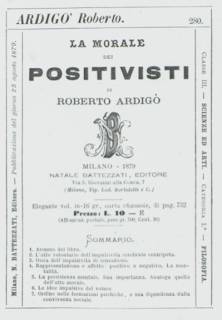 Natale Battezzati was a printer/publisher in Milan from the mid-1800's onward. The publishers had a bi-monthly publication that carried information on new books in print. The publication was used by booksellers and customers to find books of interest. However, unless a bookseller had a perfect memory, looking for a specific book or a book on a specific topic meant combing through numerous back issues of the Bibliografia italiana. Battezzati, a member of the Associazione libreria italiana (the Italian Bookseller's Association) came up with the idea of using reprints of the title pages of books on card stock that could be kept and interfiled as a kind of "books in print" card catalog within each bookstore.

The genius of the card system was that each card had printed on each of three sides:
The cards could also have overprinted a table of contents or a summary of the contents. Each publication was also to be given, in the upper right corner, a number that could be used by the bookstores in ordering.

Thus, the bookseller would receive three copies of the card for each new book, and could create three card files. Battezzati's purpose was to increase sales by making it easier for a bookseller to satisfy the needs of the customer.

So much of this seems familiar to us today: a single "unit" card with multiple headings, a unique numbering system for books ... it's no wonder that Dewey was impressed, but it's still unclear why a reference to the system would be included in all fourteen editions of DDC that Dewey personally oversaw.

Of even greater mystery is a statement by Battezzati in one number of the association's journal that Dewey, sent by his government to the World Exposition in Vienna in 1873, saw the cards demonstrated there. This is probably a mis-interpretation by Battezzati of a letter sent to him by Dewey, since it is highly unlikely that Dewey, at the time a 22-year-old college student, would have been sent to represent the United States at such an event in Europe. It is more likely that Dewey saw the cards in the articles in the Bibliografia italiana, which was held by a few major libraries on the East coast (Dewey was attending Amherst College in 1873), such as the Boston Atheneum. There were other misunderstandings on Battezzati's part, since he referred to Dewey as the secretary of the "Associazione dei Libraj d'America" -- that is, the Association of American Booksellers.

At first I thought it was a joke: "Speaking at the TED Conference today in Long Beach, Calif., Brin told the audience that smartphones are "emasculating." "You're standing around and just rubbing this featureless piece of glass," he said."  Perhaps I didn't believe it was true because I first encountered it in the form of a BoingBoing parody for "Mandroid: Google's remasculating new operating system." Another one of those moments when reality and parody are just soooooo close.

The Ted talk won't be available for while so I don't know if he said this with any hint of humor. (I rather hope so, but I fear not.) The talk was about the Google Glass product, which he was demonstrating and promoting.  But even if he meant the statement as something of a joke, there are things that need to be said about the not-so-sub text.

1. Using "emasculating" to deride a competitor's product when neither product has anything to do with gender is just a cheap shot. It's like Coke saying that Pepsi is "emasculating."

2. The ongoing attempt to raise the testosterone levels of electronic equipment has gotten out of hand. Yet, unfortunately, products must make an appeal to identity in order to sell. Apple pushes an identity of design and sophistication that was once considered "un-manly" by early Mac reviewers. Brin's remark, albeit nonsensical, pushes back against Apple's more gender-neutral image.

3. It makes little sense to eliminate women from your market, and promoting a product as a kind of "technology viagra" is not going to win over female consumers. Brin's remark shows that he's more concerned with promoting a masculine image that he is comfortable with than with following good marketing practice.

Wikipedia Women in Computing
Gender codes: why women are leaving computing edited by Thomas Misa
How to market to women, by Carol Nelson (1994, so a little out of date, but still useful)