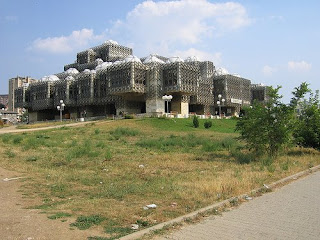 It's 4:25 pm and the call to prayer is broadcasting from a nearby mosque. Today was a day of ceremonies at the BKUK (National and university libraries of Kosovo), above.

First, though, after getting up I spent over an hour looking out my hotel window at a crowd gathering in front of the Swiss embassy, just two doors down. A few people entered the embassy, the others overflowed the sidewalk across from the embassy, nearly blocking the street. On first glance my mind read "protest" but I soon noticed that most waited in anticipation and some level of excitement. After a while gates must have been opened because first one group, then others flowed through the gate into the courtyard of the embassy building. I assume that the lineup had something to do with getting visas or work permissions. There was something hungry about the tenor of the crowd, like the look of day laborers when a truck pulls up to them.

The city's population is young and fashion is obviously very important, although the fashion here has its own flavor. Where overly big clothes are the rage in the US, here everyone seems to be wearing clothes that are one or two sizes too small. The makeup reminds me of what my friends and I must have looked like in high school, that is, a general lack of subtlety.

We went to the library and met briefly with the library director, Dr. Bashoti. (This is one of the few names that I remember, as they are almost all so unlike anything I have previously encountered.) The library was built probably in the 70's and is very strange in design, with many domes and an outer shell of metal sculpture that makes me think that the whole thing is in bondage. Inside, however, the domes become wonderful sky-lights, so the light inside is soft but natural. The entrance to the library sweeps up a grand staircase that ends in a semi-circle of stone steps that remind me of a roman amphitheatre. The venue is so elegant that it was the site of the signing of the Kosovo constitution, just a few days ago.

For the opening of this, the sixth Library Week, we gathered in a formal auditorium to hear lauditory speeches by representatives of the US Embassy, the BKUK, and Kosovo's ministry of education. Before the speeches a piano and cello piece was performed followed by a short bit of operatic singing. The female performers wore dramatic black dresses and makeup. More music was performed after the speeches including a highly tumultous piece called Vale mbi dalge (both of the e's should have umlauts, which someone told me is a sure sign of the Albanian language - lots of umlauts).

In the afternoon there was the grand opening of the American Corner, a single room in the library building that looks almost like a small public library, with books and computers. Like most libraries outside of a relatively small number of Western countries, the materials are all "on site use." (It's weird to see "library books" with no plastic jackets, no bar codes, no ownership stamps. There's nothing that says: "library book.") The young American women working on the Corner fortunately have an expansive and open spirit, and they have equipped the place with a big flat-screen TV and lots of videos and DVDs. One woman showed me proudly that she had ordered episodes of Seinfeld and the Mary Tyler Moore show. (If you come here in a year and there is a restaurant called "Soup Nazi," you will know why.) They hold English classes (and I'm invited to one on Thursday if I get finished with other matters in time). My main task for the corner is to find out how they can order some of those revolving paperback stands that public libraries use.

Following both ceremonies there was "Koktej" -- literally "cocktails" but actually your basic office event spread of pretzels, cheese, cold drinks and wine, all with plastic plates and cups. These were very popular and I didn't even try to approach the tables with the goodies.

After that I gave my first talk -- with simultaneous translation into Albanian and Serbian. This one was on "the role of documents in the founding of a country," or at least that's how the request had been transmitted to me. I talked about the formation of the post office and Library of Congress, and why information had been considered important for a new democracy. No one asked questions and I got zero feedback from the group, which means that I have no idea how the remainder of my talks will go over.

Tomorrow at 9 am a US Embassy driver comes to take me to the "American High School," a kind of English immersion school run by a Canadian. Then we go to Prizren for day 2 of library day. Day 2 consists of a talk on Digital Libraries by local librarians, lunch, the second anniversary of the American Corner in Inter-Municipal Library in Prizen (listed as "Manifestation" in the agenda, so I have no idea what that is about), then my talk, which they have entitled "Digital Libraries -- How to use digital means for preservation and cataloging of old / rare books."

I still haven't actually seen the user view of a library, but hope I will in the days ahead. So far, the only connections I have made where I might get to talk to people about what they are trying to do is with the American University and the American High School. The language barrier is very difficult; enough so that I cannot gauge how much of a conceptual barrier there is.
Posted by Karen Coyle at 7:25 AM