This was a totally AMAZING day, in so many ways. I hardly know where to begin.

We went to the "Inter-municipal Library" of Prizren. Prizren is a historical city going back to Roman times. It was a major trade route, and also one of those areas that was often conquered -- Romans, Ottoman Turks, 14th century Serbs. It holds a lot of Ottoman history and also still has a significant Catholic population. It is thought of as the most ethnically diverse city in Kosovo.

The road from Prishtina to Prizren is a two-laner with everything from cars, trucks, tractors, and donkey carts. Along the road there is an interesting mix of new construction (much of it looking to be stalled at the half-finished stage) and abandoned buildings, probably from the Yugoslav era. Construction, both old and new, does not look very solid, but there are many business and office buildings being built just outside of Prishtina, which shows at least an optimism about economic prosperity. (There were also sheep, cows, and some of the scruffiest looking dogs I have ever seen, but who stood by the road just defying the traffic to encroach on their territory.)

At the library, we arrived for a celebration of the second anniversary of the American Corner in their library. The AC space is small, but a small group of volunteers has turned it into a learning center, with English classes, movie nights, book groups, and activities for children. Oh, the children! We came into the meeting room and there were about 25 children at the front of the room in their finest: the little boys in suits, the girls in what I can only think of as "princess dresses" -- white and sparkly. I'm guessing that the age was about 5-6, but there was a great variety of sizes. I didn't get where they were from, but I'm guessing there must be an American school or an English language program at a school. They each wore a paper crown with a sticker with the logo of the American Corner. The US Embassy representative I was with whispered to me that the stickers were created by the embassy as bookplates for the books in the American Corner. So there were these little kids wearing book-plate tiara's, and the teacher led them in a number of songs. They did "Bingo was a dog" (or whatever it is called); "You are my sunshine", "The ABC song" and other great songs. It was definitely "through the looking glass". At the end, they shouted out in unison (and one little girl could really shout!) "Thank you America!" 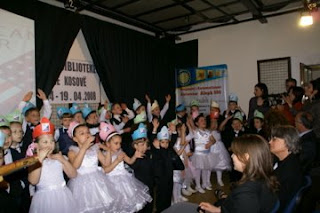 Then volunteers from the American Corner came and talked about their work, in English. This was a real point of pride for them, and they had clearly worked very hard.

Next I gave a talk on digital libraries and digitization. Not too interesting. I did get a few interesting questions about dealing with old materials and about copyright. Laura, the US Embassy rep, had told me that the library had done a project where they asked local citizens to bring in old books that they had, and the library scanned some pages and prepared a book "catalog". One of the librarians went and got a copy of the book catalog and an old manuscript book, and brought them for us to see. Just amazing! They have a huge collections of manuscripts that have not had hardly any care, and many of the most incredible works are still in the hands of individuals. I asked for, and was given, a copy of the book that they did, and will show it around. This is a place where there are historical works that have probably never been seen by scholars.

From the library we went to the Gazi Mehmet Pasha mosque and library. The library is a small octagonal building that was built to be GMP's tomb. Unfortunately, he died in battle elsewhere and his body never made it back home. The US contributed funds to restore the building and discovered the empty tomb under the floor. The building houses a library of books, mostly donated by locals, mostly manuscript, and mostly in states of disrepair. (I took some pictures with the embassy's camera, so I will post them and link from here in a few days.) The building is unheated, probably reasonably dry, but the books are not being kept in an archival environment. The folks showing us around told us that the library covers a wide range of topics. There also was a box on the floor with bits and pieces -- single sheets, book covers (one with what looked like Venetian style end papers) -- and they told us that in another building they have many, many boxes like that. We looked at a book that was printed from plates, dated 1768. That was one of the more modern ones. 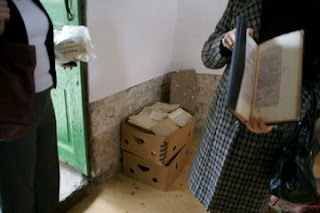 We also visited the mosque -- small, but with that stunning austerity that mosques have. And lots of stories about being rescued from assorted enemies.

As we left, I was given truly heartfelt thanks from the man who is responsible for the library and mosque; perhaps in his late thirties (I'm bad at ages), he talked about the hope that he has for his children, and how grateful he is that "America" stepped in and allowed them to restore the library and preserve their heritage.

Can I say now how inadequate I felt? This is one of the many places on this planet where $50K could transform our knowledge. Some scanning equipment and a bit of metadata work would make previously unseen works visible. I'm sure there are thousands of places like this on the planet, maybe untold thousands. It just really hurts to see it first hand.

On to day 3. Oh, and my suitcase finally arrived, just when I was really beginning to appreciate minimalist living. But now I have my camera with me, so I will try to make up for time with the photos.
Posted by Karen Coyle at 9:22 AM