This was a somewhat "ordinary" day in Prishtina. The US Embassy folks here have been kind enough to get me out of some of the ceremonial activities so that I can meet one-on-one with librarians. So, for example, I showed one person how to order a new copy of the DDC, and also how to find Dewey numbers for books that don't show up in the LC catalog (hint: WorldCat). This was at a small library, and when I told them that a library system would automatically download the bibliographic data for books from LoC or other sources, their eyes truly lit up.

Now I'm watching Bugs Bunny in Albanian. As a credit to the animators, the language really doesn't change the viewing experience.

Here are some tidbits:

Some older men still wear the traditional white wool felt Albanian hat. When it rains, they wrap it in a plastic bag.

Bill Clinton's "My Life" is available here in Albanian. (Actually, they seem to translate a lot of works.)

I went to the local market. Basically: cigarettes, onions, eggs, onions. And a bit of everything else. 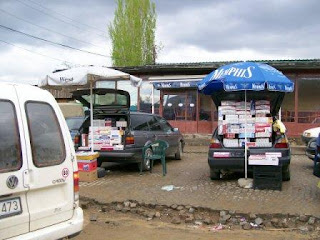 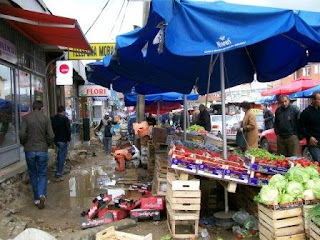 The student bookstore had various locally created computer books, guides to Windows 95, 98, and XP; the Excel guide included a disk with the software -- obviously not with the Windows Genuine logo. An American Fulbright fellow said that you could get the entire Adobe suite for a few euros. I feel a bit sheepish about telling them the virtues of free software -- it's all almost free here.

KFOR is in force. We pass armored cars on the roads and have gotten unnervingly close to a few helicopters outside of the city. There are lots of UN cars driving around. You know you are in a war zone (or an erstwhile one) when the official cars have their acronym written on the roof as well as the door. 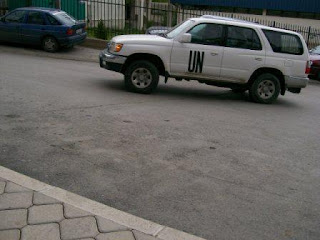 For dinner tonight I had a salad of cucumbers, onions and yogurt, followed by grilled calf brains. I'm a bit queasy, but rather proud of myself.

We're having intermittent power blackouts this evening. I'm glad I am battery powered for the most part.

Tomorrow we go to Gjilan, which is someplace that is not Prishtina but that we can get to by car in an hour or so. We will be celebrating their implementation of Aleph 500 and listening to some talks. (BTW, someone today after my talk asked if Aleph, which is the system they have, is right for them. I tactfully suggested that there may be modules that they do not need (e.g. circulation, since they don't circulate books), and that it is quite possible that a system designed for American and Western European libraries isn't perfect for them. Whew!)
Posted by Karen Coyle at 12:11 PM

Though I wouldn't want to judge whether Aleph 500 is the right system for the libraries you are visiting, it's worth noting that it was developed for Israeli, rather than US or Western European libraries originally. It's true that much recent development (say the last 10 years) has been focussed on the US and European markets, and much has changed, but some of the underlying assumptions (and data structures, and code I believe) remain the same.

Smaller or resource poor libraries have a bit of a dilemma when investing in library systems. Systems like Aleph or Millenium are expensive and tend to come with management overheads, and as you note, functionality that may not be required. On the otherhand, they come with everything you would expect from an 'enterprise' type LMS. Smaller packages which might well 'do the job' tend to lack some of these functions which US and W European libraries take for granted.