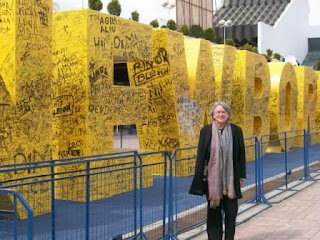 I'm back home, but want to recount my last day in Kosovo and some thoughts about the libraries there.

Friday morning I was back at the national library to give my final talk, "Libraries in the Web." I had re-done this as a version of the talk I give about getting more library visibility in the web. As I packed up my bags in the morning and thought about the talk I had the sinking feeling that this one would be totally irrelevant to the audience, so I was just wanting to do it and get it over with. I had brought with me books for the American Corner library (one each by H Clinton, Obama and McCain). I also had with me, on the advice of an American living in Prishtina, thirty small American flag pins. I found them a bit of an embarrassment, but she had said that people love anything having to do with America. I took the pins with me to the auditorium and set them out on the front table, figuring that if people weren't interested they would pass them by and I'd just feel a little silly. They went like hotcakes. Not only that, my talk went over well, and I got good questions.

The reason for the interest in making libraries visible on the web, I believe, is that these libraries have existed in deep isolation for a long time. Many of the librarians have a great desire to connect to the larger library community in the same way that the entire country is looking to become part of a world that it was cut off from for so long.

There are many things that the libraries there need. First, they need to restore the physical spaces. Many libraries became government or military offices during the "conflict" of the late 90's. Next, they need books. To save the books, people took them home; many people also have in their homes books that have a family history (often manuscripts, often hundreds of years old). It looked to me that in the larger towns the library could have a collection of 3-10K books in the near future.

Then they need a way to create a catalog -- an inventory of the books. This has to be cheap, if not free, and must run on absolutely minimal hardware. They do not need functions like circulation, acquisitions, or serials check-in -- those just aren't issues at the moment. But they need to create an inventory of their holdings in a standard format so the country can create some semblance of a union catalog. The director, Dr. Bashoti, understands the importance of a union catalog, but doesn't have anyone who could advise on the technology. This is why they are adding an Aleph installation in Gjilan, because that is the obvious way to create a library network. Unfortunately, Aleph will be too expensive and too complex for the smaller libraries.

The librarians need training. They have moved from a Soviet-style system to a decade (at least) of disruption of civic life, and now they wish to embrace the West. The kind of training they need in some cases is quite basic: what resources there are available on the Internet and how to find them; they need an abbreviated catalog code in Albanian; they need information on how libraries use e-resources to serve users; they need some idea of the ways that libraries can serve schools and students.

They also need infrastructure. This is one of the great needs throughout Kosovo, where the roads have potholes as big as a car, the electricity fails numerous times during the day, and there is no trash pickup. (Occasionally, KFOR stations schedule a trash pickup in their area. Otherwise, trash just goes into piles alongside the road.)

The library infrastructure that is needed is mainly social -- they need a library association that gives the librarians a professional context and a way to meet colleagues. They need a coordinated way to purchase books and materials, so each library is not going out looking for vendors on its own. They need someone to organize licensing for the entire country. They need a vision for the libraries that each library can work toward.

Like the sign says, Kosovo is "newborn" -- there's a lot of hope for the future, but a long way to go.
Posted by Karen Coyle at 6:01 AM

I am jealous! It was December, 2005 when I flew from Prishtina for the last time. I was there to teach Community Policing as a contractor for the Dept. of Justice ICITAP program.

Thanks for sharing your experiences, I'll be reading further over the next couple days. Regarding your reading list, if you have not done so already, check out Black Lamb and Grey Falcon by Rebecca West, a narrative of travels in Yugoslavia in 1937.

Also, thanks for helping in Kosovo and being a part of what I hope will continue to be a brilliant future.