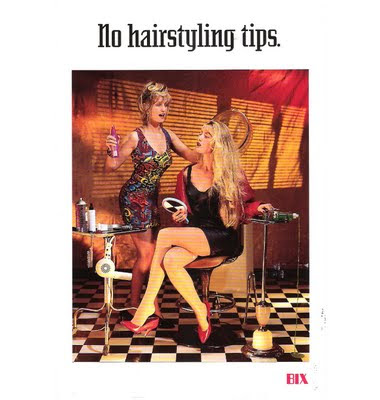 (The next few posts will be feminist in nature. If that type of thing annoys you, I suggest you skip them, and I'll be back to librarianship in a trice.)

There is a new generation of women dealing with the nature of computing culture. Fortunately, they have social media to help them cope. (Example1, Example2) Reading their posts reminded me that in the mid-90's I did talks about the portrayal of women in computer magazines, and that I might have some illustrations that were still usable. I have only a few since most of my examples ended up as black and white transparencies that aren't scan-able. But in the next few posts I'll offer what I do have, all from about 1995.

The above image is of a postcard that I received in the mid-nineties from a bulletin board system (BBS) called "BIX". BBSs were the only way to get online in those days, although by the mid-nineties most gave you a pass-through to the Internet. A BBS was a kind of mini-AOL: an online gathering and posting place that was a walled community. The first BBS I joined was CompuServe, since that was the main place for technical information about PC hardware and software. (Note: there was a little or no product information on the Internet, which in the 1980's and early 90's was strictly limited to academic activities and research.)

I must have gotten the BIX card because I subscribed to PC Magazine. The message, however, was far from inviting. Here's the back of the card: 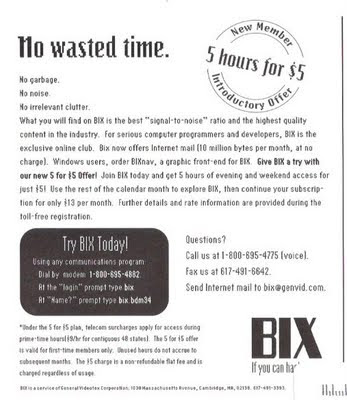 No garbage.
No noise.
No irrelevant clutter.


Which, as the card illustrates, obviously meant: no girls. 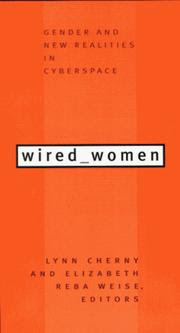 I have more examples of this "boy's club" atmosphere in 1996 in my article in Wired Women: How hard can it be? (Available on my site.)
Posted by Karen Coyle at 10:41 AM

You don't mention that, at the same time as women are excluded, the image serves to attract the eye of the stereotypical male viewer.

Jason Scott says: "Place a white sheet or paper board behind the transparency, then scan."