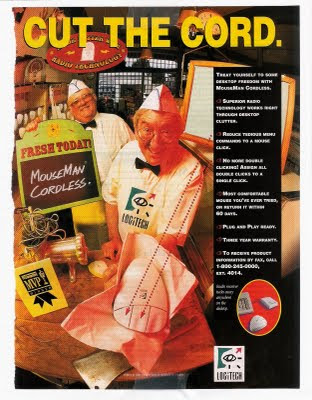 The title of this post was a teaser headline on the cover of USA today -- no, I don't remember when, but the statement definitely struck me. Yes, we are different. Our different points of view are so deep that it's often hard to explain why something matters.

This ad for the cordless mouse clearly made it all of the way through the company's management structure without raising an eyebrow, but many women I have shown this to have had a visceral reaction, since "cut the cord" brings up thoughts of childbirth, which makes this photo of butchers pretty gruesome.

Around this same time (and I'm again talking about the mid 1990's) women began complaining about the title of the back page of PC Magazine: Abort, Retry, Fail. It was a page of bloopers and idiotic error messages. You have to be of the older generation to remember what ARF was about, since it was a DOS error code. There are some examples here in case you are either a) too young to remember, or b) wanting a nostalgia trip.

In any case, some women objected to the use of Abort, Retry, Fail for a humor page because the term abort wasn't at all humorous to them. Men didn't understand this at all. They also seemed to think that the meaning "to end a process" was the main usage of the term, and that its association with a failed pregnancy was just a minor nit, hardly worth noticing. It obviously all depends on which meaning of abort has had the greatest affect on your life. PC magazine did change the name to Backspace, and changed it back again to Abort, Retry, Fail in 2006. The magazine didn't survive much longer, but having nothing to do with its back page, I'm sure. 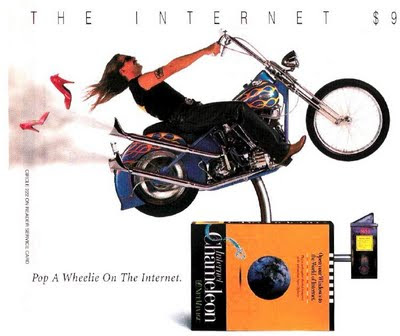 This last image (unless I get ambitious later and scan some more) could almost have been used as a test for "Are you a man or a woman?" Chameleon was software for managing your Internet connection, and darned good software at that. We used it in my place of work for years. If you see a man on a motorcycle and nothing else, you just might be a man. If you see some high heels flying in the air and get an image of a woman having just been dumped on the road, you're either a woman or would make a great boyfriend. In my talks and writing I called this image: Woman as roadkill on the information highway.

It always amazes me how separate the realities can be for men and women, although there's a chance they are no more distant that those of rich and poor, abled and disabled, or any other human dichotomy you can come up with. I can say that having experienced the world of computing for nearly forty years as a woman, these differences in perception have a real effect on getting along and getting things done. One of my favorite statements is from Professor Ellen Spertus who teaches and encourages women in computer science, and who says: "You can be both rigorous and nurturing." My translation of this is: women's views count, too.

What I see in the motorcyle image is a woman rider who has kicked off her restraining high heels and is loving the freedom of the road.

Until I read the explanation it never occurred to me that it could be an image of a man who had dumped a woman by the side of the road.

Kathy, I love your positive attitude.