Libraryland, We Have a Problem

The particular problem that I have in mind is the disconnect between library data and library systems in relation to the category of metadata that libraries call "headings." Headings are the strings in the library data that represent those entities that would be entry points in a linear catalog like a card catalog.

It pains me whenever I am an observer to cataloger discussions on the proper formation of headings for items that they are cataloging. The pain point is that I know that the value of those headings is completely lost in the library systems of today, and therefore there are countless hours of skilled cataloger time that are being wasted.

Both book and card catalogs were catalogs of headings. The catalog entry was a heading followed by one or more bibliographic entries. Unfortunately, the headings serve multiple purposes, which is generally not a good data practice but is due to the need for parsimony in library data when that data was analog, as in book and card catalogs. 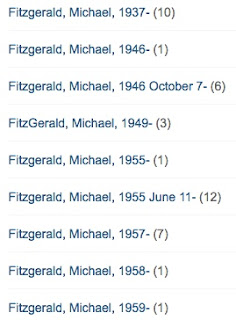 The last three functions, providing a sort order, access, and collocation, have been lost in the online catalog. The reasons for this are many, but the main explanation is that keyword searching has replaced alphabetical browse as a way to locate items in a library catalog.

The upshot is that many hours are spent during the cataloging process to formulate a left-anchored, alphabetically order-able heading that has no functionality in library catalogs other than as fodder for a context-less keyword search.

Once a keyword search is done the resulting items are retrieved without any correlation to headings. It may not even be clear which headings one would use to create a useful order. The set of retrieved bibliographic resources from a single keyword search may not provide a coherent knowledge graph. Here's an illustration using the keyword "darwin":

Gardiner, Anne.
Melding of two spirits : from the "Yiminga" of the Tiwi to the "Yiminga" of Christianity / by Anne Gardiner ; art work by
Darwin : State Library of the Northern Territory, 1993.

Darwin, Charles, 1809-1882.
Origin of species by means of natural selection; or, The preservation of favored races in the struggle for life and The descent of man and selection in relation to sex, by Charles Darwin.
New York, The Modern library [1936]

No matter what you would choose as a heading on which to order these, it will not produce a sensible collocation that would give users some context to understand the meaning of this particular set of items – and that is because there is no meaning to this set of items, just a coincidence of things named "Darwin."


Headings that have been chosen to be controlled strings should offer a more predictable user search experience than free text searching, but headings do not necessarily provide collocation. As an example, Wikipedia uses the names of its pages as headings, and there are some rules (or at least preferred practices) to make the headings sensible. A search in Wikipedia is a left-to-right search on a heading string that is presented as a drop-down list of a handful of headings that match the search string: 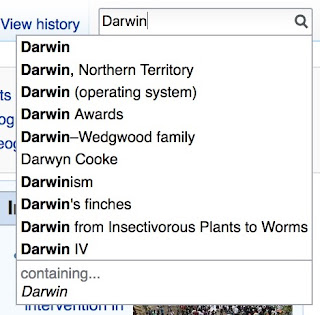 Included in the headings in the drop-down are "see"-type terms that, when selected, take the user directly to the entry for the preferred term. If there is no one preferred term Wikipedia directs users to disambiguation pages to help users select among similar headings: 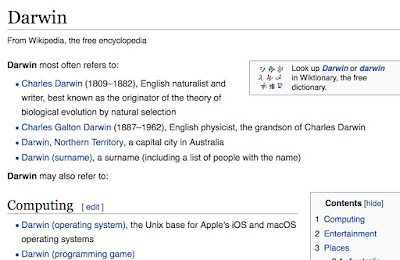 The Wikipedia pages, however, only provide accidental collocation, not the more comprehensive collocation that libraries aim to attain. That library-designed collocation, however, is also the source of the inversion of headings, making those strings unnatural and unintuitive for users. Although the library headings are admirably rules based, they often use rules that will not be known to many users of the catalog, such as the difference in name headings with prepositions based on the language of the author. To search on these names, one therefore needs to know the language of the author and the rule that is applied to that language, something that I am quite sure we can assume is not common knowledge among catalog users.

I may be the only patron of my small library branch that has known to look for the mysteries by Icelandic author Arnaldur Indriðason under "A" not "I".

What Is To Be Done?

There isn't an easy (or perhaps not even a hard) answer. As long as humans use words to describe their queries we will have the problem that words and concepts, and words and relationships between concepts, do not neatly coincide.

I see a few techniques that might be used if we wish to save collocation by heading. One would be to allow keyword searching but for the system to use that to suggest headings that then can be used to view collocated works. Some systems do allow users to retrieve headings by keyword, but headings, which are very terse, are often not self-explanatory without the items they describe. A browse of headings alone is much less helpful that the association of the heading with the bibliographic data it describes. Remember that headings were developed for the card catalog where they were printed on the same card that carried the bibliographic description.

Another possible area of investigation would be to look to the classified catalog, a technique that has existed alongside alphabetical catalogs for centuries. The Decimal Classification of Dewey was a classified approach to knowledge with a language-based index (his "Relativ Index") to the classes. (It is odd that the current practice in US libraries is to have one classification for items on shelves and an unrelated heading system (LCSH) for subject access.)

The classification provides the intellectual collocation that the headings themselves do not provide. The difficulty with this is that the classification collocates topically but, at least in its current form, does not collocate the name headings in the catalog that identify people and organizations as entities.

Controlled headings as access points for library catalogs could provide better service than keyword search alone. How to make use of headings is a difficult question. The first issue is how to exploit the precision of headings while still allowing users to search on any terms that they have in mind. Keyword search is, from the user's point of view, frictionless. They don't have to think "what string would the library have used for this?".

Collocation of items by topical sameness or other relationships (e.g. "named for", "subordinate to") is possibly the best service that libraries could provide, although it is very hard to do this through the mechanism of language strings. Dewey's original idea of a classified order with a language-based index is still a good one, although classifications are hard to maintain and hard to assign.

If challenged to state what I think the library catalog should be, my answer would be that it should provide a useful order that illustrates one or more intellectual contexts that will help the user enter and navigate what the library has to offer. Unfortunately I can't say today how we could do that. Could we think about that together?