Catalog and Context, Part I

This multi-part post is based on a talk I gave in June, 2016 at ELAG in Copenhagen.
This entire series is available a single file on my web site.

Imagine that you do a search in your GPS system and are given the exact point of the address, but nothing more. 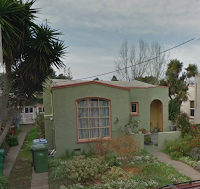 Without some context showing where on the planet the point exists, having the exact location, while accurate, is not useful.

In essence, this is what we provide to users of our catalogs. They do a search and we reply with bibliographic items that meet the letter of that search, but with no context about where those items fit into any knowledge map.

Because we present the catalog as a retrieval tool for unrelated items, users have come to see the library catalog as nothing more than a tool for known item searching. They do not see it as a place to explore topics or to find related works. The catalog wasn't always just a known item finding tool, however. To understand how it came to be one, we need a short visit to Catalogs Past.


We can't really compare the library catalog of today to the early book catalogs, since the problem that they had to solve was quite different to what we have today. However, those catalogs can show us what a library catalog was originally meant to be.

A book catalog was a compendium of entry points, mainly authors but in some cases also titles and subjects. The bibliographic data was kept quite brief as every character in the catalog was a cost in terms of type-setting and page real estate. The headings dominated the catalog, and it was only through headings that a user could approach the bibliographic holdings of the library. An alphabetical author list is not much "knowledge organization", but the headings provided an ordered layer over the library's holdings, and were also the only access mechanism to them.

Some of the early card catalogs had separate cards for headings and for bibliographic data. If entries in the catalog had to be hand-written (or later typed) onto cards, the easiest thing was to slot the cards into the catalog behind the appropriate heading without adding heading data to the card itself.

Often there was only one card with a full bibliographic description, and that was the "main entry" card. All other cards were references to a point in the catalog, for example the author's name, where more information could be found.

Again, all bibliographic data was subordinate to a layer of headings that made up the catalog. We can debate how intellectually accurate or useful that heading layer was, but there is no doubt that it was the only entry to the content of the library.


In 1902 the Library of Congress began printing cards that could be purchased by libraries. The idea was genius. For each item cataloged by LC a card was printed in as many copies as needed. Libraries could buy the number of catalog card "blanks" they required to create all of the entries in their catalogs. The libraries would use as many as needed of the printed cards and type (or write) the desired headings onto the top of the card. Each of these would have the full bibliographic information - an advantage for users who then would not longer need to follow "see" references from headings to the one full entry card in the catalog. 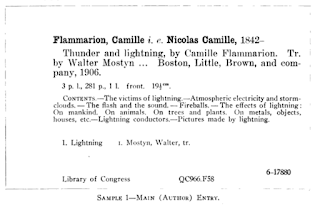 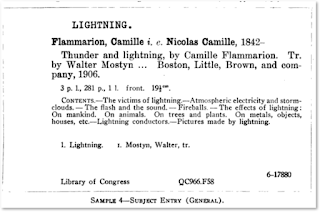 These cards introduced something else that was new: the card would have at the bottom a tracing of the headings that LC was using in its own catalog. This was a savings for the libraries as they could copy LC's practice without incurring their own catalogers' time. This card, for the first time, combined both bibliographic information and heading tracings in a single "record", with the bibliographic information on the card being an entry point to the headings.


The MAchine Readable Cataloging (MARC) project of the Library of Congress was a major upgrade to card printing technology. By including all of the information needed for card printing in a computer-processable record, LC could take advantage of new technology to stream-line its card production process, and even move into a kind of "print on demand" model. The MARC record was designed to have all of the information needed to print the set of cards for a book; author, title, subjects, and added entries were all included in the record, as well as some additional information that could be used to generate reports such as "new acquisitions" lists. 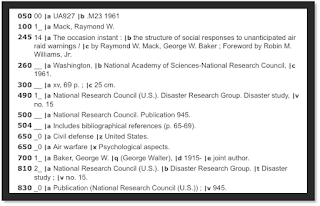 Here again the bibliographic information and the heading information were together in a single unit, and it even followed the card printing convention of the order of the entries, with the bibliographic description at top, followed by headings. With the MARC record, it was possible to not only print sets of cards, but to actually print the headers on the cards, so that when libraries received a set they were ready to do into the catalog at their respective places.

Next, we'll look at the conversion from printed cards to catalogs using database technology.