To translate the title of this post: the National Library of Spain (BNE) has developed a linked data set for its bibliographic data that makes use of FRBRer, FRAD and ISBD in RDF. There are a number of interesting aspects to their decisions, and we can now compare this solution to the solution used by the British Library for their National Bibliography (diagram in PDF).

There is an English-language article with a short explanation of the project and a high-level design of the data structure. The diagram there didn't print out terribly well, so you might want to consult the Spanish-language version from their ontology documentation page:

What I find particularly interesting about this interpretation of FRBR is that the Work ("obra") and Expression ("expresión") are considered authority entities, while the manifestation, in the darker area below, is a bibliographic entity. (If this is common knowledge, I must admit that I hadn't seen this expressed so clearly before.) The Work and Expression are coded using RDF properties (e.g. "data elements") from FRBRer, FRAD and FRSAD; the Manifestation uses RDF properties from ISBD. These are the same element sets that Pat Riva recently announced on various lists.

There is a fascinating visualization of the entities and links for de Cervantes and his works.  Note that you can zoom in and see more detail in the many nodes there. The visualization project is "in progress" and at the moment you cannot move directly from the nodes on the screen to the actual data (except by plugging in the URIs that you see). The resulting displays are similar to those of DBPedia, which means that you basically have to know what you are looking at in order to follow from one entity to another.

To view some actual entity records, Daniel Vila of the OEG-UPM (Ontology Engineering Group) provided these examples that are linked together, a Person, a Work, and an Expression:

The Expression leads to many dozens of manifestations, but here is one example: 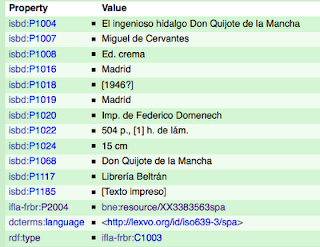 Obviously this isn't easy to read since the display does not yet substitute the names for the ID numbers of the ISBD and FRBR entities (e.g. isbd:P1004 is "has title proper").

If you look at the Work and Expression records you will see that they consist primarily of links -- the Work links to creators, subjects, and Expressions. The Work also provides some alternate display text and links to some outside sources: 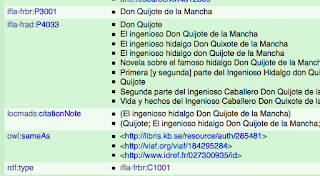 The Expression relates to the Work and the many manifestations. The only thing we would think of as a data element in the Expression in this example is a coded version of the language:

I find it particularly interesting to see this example of library data in linked data form because the only thing new here is the use of linking -- the data appears to me to be basically vanilla ISBD, re-organized using FRBR entities. One could conclude that this means that we could move into linked data without taking on the RDA step. I would very much like to see how these examples would be different if RDA were the applied cataloging rule set.

The view of Works, Expressions, plus of course Persons, Corporate bodies, and Subjects, as akin to today's authority records really serves to separate the linking entities from the description (which is in the Manifestation). The manifestation remains primarily text strings, but the examples in the BNE demo suggest that there are significant opportunities to create links between library resources and potentially to non-library resources without major modifications to descriptive cataloging. In fact, it looks like our attention should be on our authority data, which provides the linking opportunities.

More and more I come to the conclusion that in the linked data space the thing we seem to focus on today, descriptive cataloging, will be less useful than the entities that are represented by our authority data. For this reason I see VIAF as a very good start because links to and from those personal and corporate entities should give us a lot of connections to the rest of the world.
Posted by Karen Coyle at 3:27 PM