"[He] provided (i) a classified schedule of things and concepts, (ii) a series of conjunctions or 'particles' whereby the elementary terms can be combined to express composite subjects, (iii) various kinds of notational devices ... as a means of displaying relationships between terms." [1]

"By reducing the complexity of natural language to manageable sets of nouns and verbs that are well-defined and unambiguous, sentence-like statements can be interpreted...."[2]

The second quote is from a publication about OCLC's linked data experiements, and is about linked data, or RDF. The goals are so obviously similar that it can't be overlooked. Of course there are huge differences, not the least of which is the technology of the time.*

What I find particularly interesting about Wilkins is that he did not distinguish between classification of knowledge and language. In fact, he was creating a language, a vocabulary, that would be used to talk about the world as classified knowledge. Here we are at a distance of about 350 years, and the language basis of both his work and the abstract grammar of the semantic web share a lot of their DNA. They are probably proof of some Chomskian theory of our brain and language, but I'm really not up to reading Chomsky at this point.

The other interesting note is how similar Wilkins is to Melvil Dewey. He wanted to reform language and spelling. Here's the section where he decries alphabetization because the consonants and vowels are "promiscuously huddled together without distinction." This was a fault of language that I have not yet found noted in Dewey's work. Could he have missed some imperfection?! 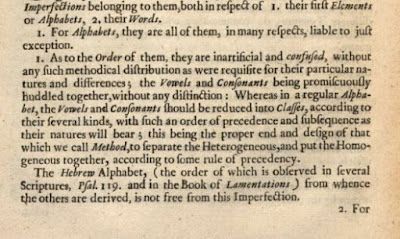 *Also, Wilkins was a Bishop in the Anglican church, and so his description of the history of language is based literally on the Bible, which makes for some odd conclusions.

[1]Schulte-Albert, Hans G. Classificatory Thinking from Kinner to Wilkins: Classification and Thesaurus Construction, 1645-1668. Quoting from Vickery, B. C. "The Significance of John Wilkins in the History of Bibliographical Classification." Libri 2 (1953): 326-43.
[2]Godby, Carol J, Shenghui Wang, and Jeffrey Mixter. Library Linked Data in the Cloud: Oclc's Experiments with New Models of Resource Description. , 2015.
[3] Wilkins, John. Essay Towards a Real Character, and a Philosophical Language. S.l: Printed for Sa. Gellibrand, and for John Martyn, 1668.
Posted by Karen Coyle at 3:59 PM

Also see BC Vickery, The significance of John Wilkins in the history of bibliographical classification, Libri, 2: 1953, 4, 326-343

Yes, thanks. That was copiously cited in the article I read, but I haven't yet been able to obtain it. I did just get a copy of Vickery's Classification and Indexing in Science from 1959, and I'm having trouble moving through it because on every page there are many things I want to make notes about. (I do, wonder, though, if I will ever get through Ranganthan's Prolegomena -- I have a copy on my shelf and look at it wistfully from time to time.)

Oh, I should mention that I met Vickery in London in the 70's. I was there and made a kind of religious pilgrimage to his door. :-)