Today's New York Times has an excellent article on women in science -- that is, of course, the lack of -- entitled Why are there still so few women in science? Coincidentally, this image hit the pages of Google+ in recent days even though it has been around since at least 2010: 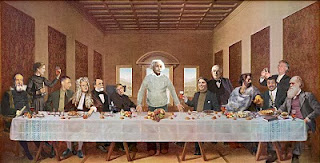 The picture has set off a huge argument about religion and atheism on the post that carried it. There has been some less rancorous discussion of who really should or should not be in the picture. One woman posted that there are other women who should be there, but no one seems to have noticed the portrayal of the one women who is there, Marie Curie.

Of course it is absolutely right that Marie Curie be portrayed - as one of the few people who have earned more than one Nobel Prize, and the only person to have been awarded Nobels in two different scientific areas, she is obviously qualified. However, the problem is the portrait, which is not of Marie Curie, but Marie Curie as portrayed by Susan Marie Frontczak in "Manya," a one-woman drama on the life of Marie Curie. This is as if the portrait of Einstein had been actually that of the actor who played him in the episodes of Alien Nation. There are plenty of photographs of Marie Curie, from her early days to her later years. 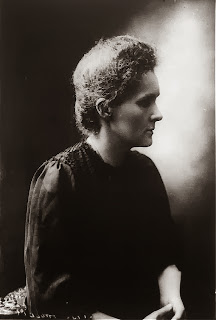 I think it is only fitting that Curie have her own identity, and not be given the image of an actress portraying her.  So this is just a heads up for the Marie Curie fans among us: you can find plenty of photos with an image search, although you will have to color them yourself. That's hopefully not to much to ask as a way to honor such a significant scientist.
Posted by Karen Coyle at 12:19 PM