While the news debates the NSA's PRISM program, a massive collection of data points of electronic communication, the more human side of spying is being pushed to the background. Yet if you are fearful of privacy invasion, there is nothing more chilling than a reading of FBI files with accounts of informants and statements about "Communist leanings" and "pro-Russian" attitudes. You can get a taste for this in the FBI Vault, a public file of de-classified documents, most of which are revealed upon the death of the target. The A-Z list (which appears to be a selection, as other names can be found with searches) is full of famous names, from Al Capone to Al Gore, from George Burns to Marilyn Monroe, and from Helen Keller to Leon Trotsky. (The list is only marginally alphabetical, by first name, which is almost as shocking as the contents of the files.)

This is old-fashioned stuff for the most part. Type-written letters, lots of scribbled initials, and whole chunks of documents blacked out with what must be a special FBI-invented marker. 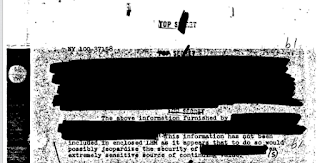 On a more modern note, who could resist adding their favorite FOIA file to Facebook?

Not everyone in the Vault is a potential "enemy of the state." Some are there because they were threatened, and the FBI was doing its "protect and serve" job. But coming to the attention of the FBI is often not a good thing. In the case of Bradbury, an informant tipped off the Bureau that Bradbury may have attended a writers' meeting in Cuba. This set off an investigation.

The report is itself a boon for any biographers (and Wikipedians). It gives his family history (back to 1630), location and occupation of all living family members, information about his spouse (including the location of the church where they were married), and of course his yearly income. Given that this report is from 1959, you can just imagine how much more information the FBI would have today. There are whole pages that would do a reference librarian proud: a list of his professional memberships, a complete bibliography, film credits. There is even some level of literary analysis:


"... BRADBURY was probably sympathetic with certain pro-Communist elements in the [Writers Guild of America, West]... [Informant] stated it has been his observation that some of the writers suspected of having Communist backgrounds have been writing in the field of science fiction and it appears that science fiction may be a lucrative field for the introduction of Communist ideologies."

Admittedly, this was high "red scare" time still, and Bradbury was working in and around Hollywood. However, the informant seems to have been unfamiliar with the work of L. Ron Hubbard.

Every file here has some gems worth reading. And don't forget to check the category "Unexplained Phenomenon".
Posted by Karen Coyle at 10:37 AM